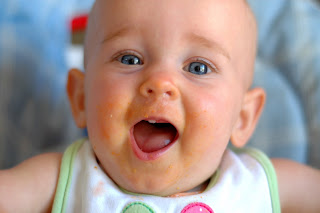 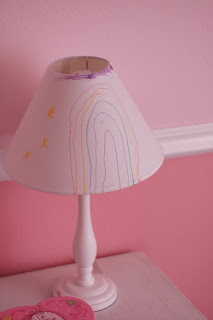 How could you possibly discipline a child for creating something as beautiful as this...on her new lampshade..in perfect ROY G. BIV order. You have to wonder what was going through her head when she came up with the idea...
"This lampshade is just not doing it for me, it needs a spash of color...a heart? a smily face? a rainbow! That's it. Let see, I need to sneak my crayons up to my room first. Then find the red one (Should I really be doing this? I know it will look great, even if Mom doesn't think so). Then orange (I'm liking what I see here). Now yellow (Yes, a rainbow was a great choice), Green, blue and purple. Wait it needs a little something more. Hmmmm, how about some yellow stars next to it. And then lets just scribble a little purple on the top for good measure. Ahhh, now we have perfection. And just in case Mom isn't completely pleased, when she walks in the room I'll say, "Hey, who did this?" and totally throw her off.
Posted by Erin at 1:22 PM 1 comments 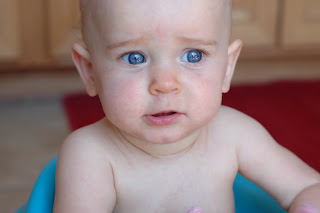 Roseola effects: extremely fussy baby, no interest in food, napping, playing or anything besides being held by mommy and that sometimes doesn't cut it either.

Roseola duration: at least 4 days (which explains my lack of showering, sleeping, cleaning and blogging)
Posted by Erin at 9:11 PM 0 comments

When I was in second grade we had 2 class pets, Cain and Abel. They were hamsters, gerbils, or some other tailless rodent. Each weekend a student got to bring them home in their little rodent cage (wheel included) and take care of them for 2 whole days. Anyway, I was the lucky student who got to bring them home for not just a weekend, but for the entire spring break. I was not so lucky however when they got lost on day 1 and were found dead behind the dryer on day 7.

With Brooklyn starting school I expected sometime to have to care for yet another class pet. This time trying a little harder (for her sake) to keep it alive. So you can imagine I was beyond thrilled by the genius idea of her kindergarten teacher to have Faith, the build-a-bear, as the class stuffed pet. No feeding, water changes, messes on newspaper, and most importantly no death (well, I guess she could get lost, which is like death to a stuffed animal- just ask Woody or Buzz). And Brooklyn was the first one to bring Faith home (to her great excitement). She was supposed to look after Faith and write about their adventures together in a little journal. Now I don't know what kind of adventures most kindergartners have over the weekend but we were seriously lacking any form of adventure around here this weekend. It was either a ride in the basket of Brooklyn's bike (which I was against considering it was super hot outside) or baking cookies (which had to be the no-bake recipe because it was seriously hot inside). She chose the cookies (which I am enjoying even as I type).


Brooklyn and Faith's Adventure in the Kitchen. 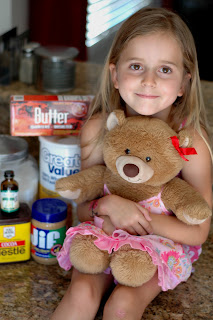 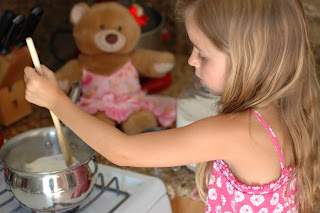 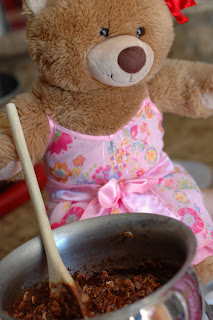 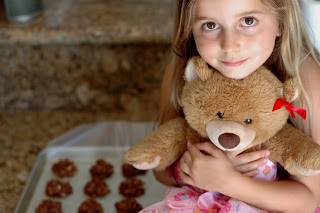 We made cookies together. They were yummy. We shared them with my family. By Brooklyn
Posted by Erin at 8:51 PM 1 comments 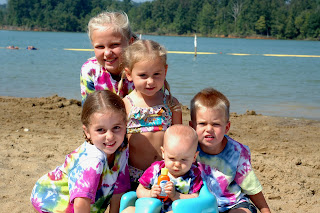 Cousins have such a special bond even when they live miles away. The girls had a blast playing with Kaylie and Cade in Nashville. They were together 10 days straight and got along amazingly well. Kaylie is the typical older cousin sharing her bunk bed (a thrill for my girls), her old Barbies, and her cool clothes. Brooklyn adores her and was in a trance following her every move the whole time. Cade was a good sport being surrounded by 4 girls playing fairies all day. When I told him I brought him something special form Walmart, he said real excited, "A fairy?" The poor boy wanted his own. Don't tell his dad! 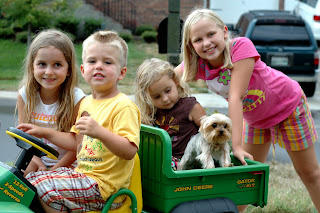 Kayle and Cade live in an All-American neighborhood. Tons of kids running wild, lots of porches with rocking chairs, and a trampoline in every back yard. One night the neighbor kids drug out the John Deere (which has had a dead battery since it was rescued form the dump). They loaded the little kids in and pushed it to the top of a huge hill, and then pushed it down as fast as they could. More thrilling than Disneyland I tell you. I've never heard such squeals of delight form Brooklyn and Ellie. Part of me did wish they were wearing helmets though-could you imagine the head injuries- my mom would have fainted for sure.
Posted by Erin at 3:01 PM 0 comments 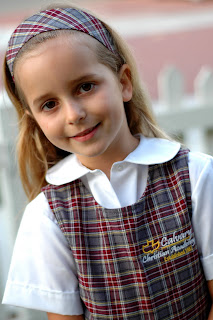 Today was Brooklyn's first day of school. I don't know how putting on the uniform instantly made her older and more mature but somehow it did. She looked adorable. We bought the uniforms earlier this summer, and she was so proud, she asked to wear it out of the store. She couldn't resist trying them on multiple times throughout the summer (and neither could little sister Ellie). I wonder how long it will take before she is complaining about having to wear them every day. I love the idea of no battles in the morning about what to wear (which we have been having for at least 3 years now). 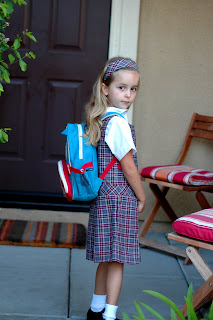 Unfortunately this will be the only day she gets to use the adorable owl backpack since the enormous-1/2 the size of a kindergartner-binder they require her to carry doesn't fit in it. We had to make a pit stop on the way home at Target to buy a newer, bigger, and slightly less cute Paul Frank one. 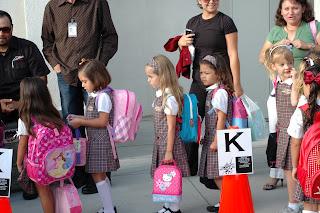 I was really curious as to what info we would get out of her when she came home from school.

Got this amazing lens as a suprise anniversary gift from Brett and just look what she can do.... 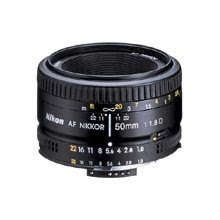 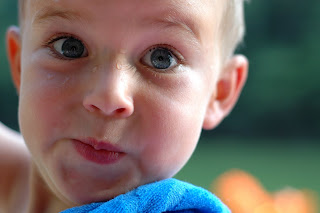 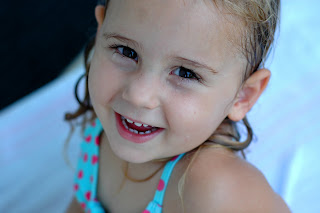 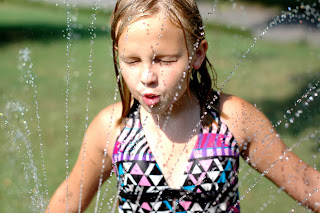 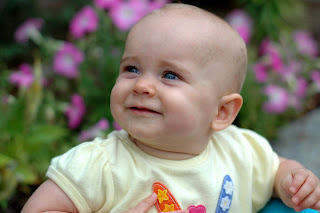 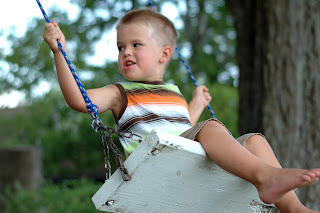 I can get the aperture down to 1.8 with this baby (meaning the background can be totally blurred). Now I've got over 800 pics to sort though of our family tip to Tennessee. More to come....
Posted by Erin at 8:14 PM 3 comments

before & after message board 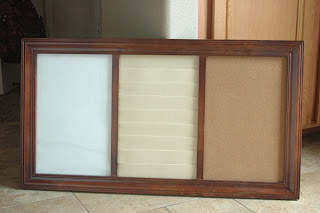 A friend had given me this a few months ago, but unfortunately we had no wall space to accommodate anything over 24" wide (beauty of condo living). I was determined to use the thing somehow, and decided to make a message center for all of Brooklyn's school stuff (which she will be using in 15 days- holy cow!). Had to deconstruct the whole thing, redo the middle section with different fabric facing the opposite way, and give the frame some fun color. Check out Brookyn's adorable school backpack (I had to do just a little convincing to get her to pick this over a Disney princess one.) 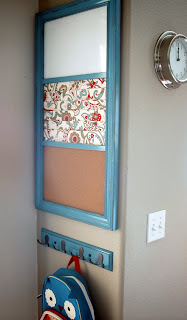 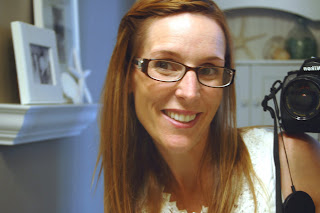 So these are the frames you pick out when your eyes are dilated and you can't see jack. Not too bad I guess. I figured I needed to get back to the eye doctor since it had been over 5 ears since I had been, worn contacts, or glasses. I thought I backed into a parked car within five minutes of first putting them on...not to worry though , just a curb- nothing out of the ordinary for me.

Erin
I am blessed to be a proud momma bird and to spend lots of time in my nest with my 3 little nestlings. Each day I realize more and more what a challenge it is to raise these little ones, and how much I need God's love, patience, joy, and guidance moment by moment. I know that through Him, and His word, I can be the mommy He desires me to be. This blog is a way for me to record those every day moments that slip away so easily, and to let others get a glimpse of life in my blessed nest.

Even the sparrow finds a home,
and the swallow builds her nest and raises her young
at a place near your altar...
What joy for those
who can live in your house,
always singing your praises.
Psalm 84:3-4